In the 1960’s bleeding gastric and duodenal ulcers required emergency surgery. Well, not exactly! It was known that, in most cases, bleeding stopped before the patient bled to death. So the strategy was to give “medical treatment” involving fasting, resting, washing out the stomach with a large bore tube, placing various solutions of drugs and antacids in the stomach, and waiting to see what happened. All the while the patient was given blood transfusions. After multiple transfusions, often completely replacing the patient’s blood volume, surgery might be tried. By this time the patient might be close to death and the anaesthesia itself could be fatal.

About then, a surgeon called Wangensteen at the University of Minnesota USA, on the basis of some animal experiments, introduced a machine to automatically lavage the stomach with ice water. This process caught on and seemed to stop the bleeding in many cases. At least it was better than nothing.

In this era, Wylie D. Gibbons learned the technique, critically evaluated then improved on it, and collected a series of patients in Rockhampton Queensland. These formed the basis of his first thesis submitted in 1965 to the University of Queensland. The thesis was rejected. Read on if you are interested. 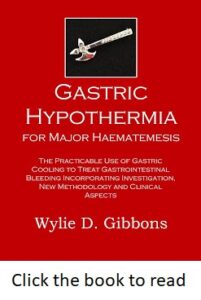 Links to the Book::

Wylie D. Gibbons Publishing,
Villa 240,
60 Endeavour Boulevard,
North Lakes, Queensland 4509,
AUSTRALIA.
Hard cover copies are available (printed as required) for USD$100 from the author. The book can be downloaded freely, even copied or reproduced, at the clickable Dropbox web location here . You can also view the several parts of the book by clicking here, which will make it faster to download. If you cannot access Dropbox (e.g. from China) please use this link to my web server.